Here is a quick summary and review of my initial experience with a Kingston SSDNow 30GB SSD. 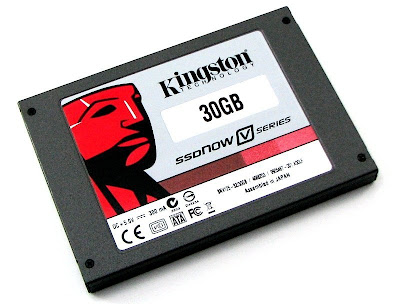 This solid state drive cost me $69 CAD on sale, although it usually retails for about $100. As it stands, this is currently the least expensive solid state drive on the market that is suitable for use as a system boot drive. While faster and more spacious drives do exist, this drive offers exceptional value and is a great choice for those on a budget. Unlike some older value solid state drives, this Kingston 30GB SSD is a second generation drive that includes TRIM support. While TRIM support is a nice bonus if you have Windows 7 installed, for use as a system boot drive it shouldn't make a big difference.
The drive came with no software or accessories - just the drive. The case is solid, but light, and doesn't feel like there is much inside. When installing Windows 7 to the drive, things went smoothly other than a small BIOS issue I had. Reseting the BIOS fixed the problem I was having, which was causing my computer to crash when the drive was accessed.
As we will see below, both sequential and random read speeds on this drive far out pace those of a traditional hard drive. This drive does however lack decent write speeds, maxing out at about 50 MB/s, but the only time that might be bothered by this is during the Windows installation - a one time ordeal that takes under an hour. I won't bother to test write speeds today, partially because it's not an important feature of a boot drive, but also because it means formatting the drive again - I already installed Windows to it and don't want to do that again.
After installing Windows 7 and a few basic applications, I was left with 15GB of free space, out of 27.9GB. I then changed the directory location of my program files to an old hard drive so that I wouldn't clutter up the SSD with non-important applications. You can make this change in the registry. I might be able to clear up a little more room on the SSD if I deleted a few default applications and moved the hibernation or page file somewhere else - possibly a good idea considering how slow the write speeds are, but I won't.
The drive contains 30,014,435,328 bytes, or 30GB, after formating with NTFS. However, because Windows uses a different method of calculating memory, 1024 vs 1000, the drive is reported to only have 27.9GB of space. You are not being cheated, so don't worry.
As for performance, my freshly formatted system starts up noticeably faster than when I was using a 250 GB hard drive. It isn't quite instant, and considering how this SSD is one of the slowest SSDs on the market, you can't expect mind blowing results. However, as we see below, sequential read speeds are three times the speed of a standard hard drive and the random read rates are worlds apart. Applications that are loaded onto the SSD feel even snappier when they open, leading to an improved user experience. Even if it's a cheap SSD, it blows an old hard drive out of the water.
Laptop users who can only install one drive will not want this drive however, because 30GB is not enough space for everything you will need to store. The write speeds also suck. Netbook users might however be content with a bare system. Desktop users though will love this drive since they can load Windows onto it and load everything else onto large hard drives. For $69, you get great value and great performance. Welcome to the future.
Results 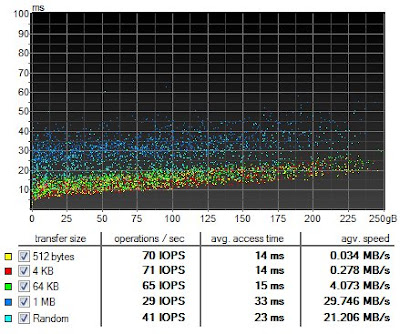 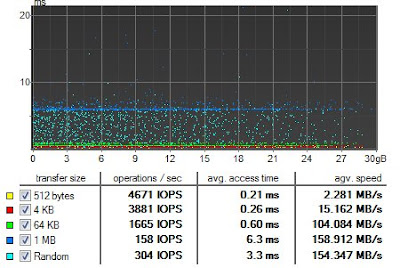 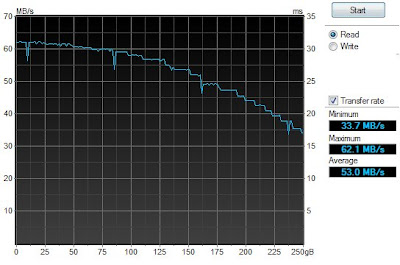 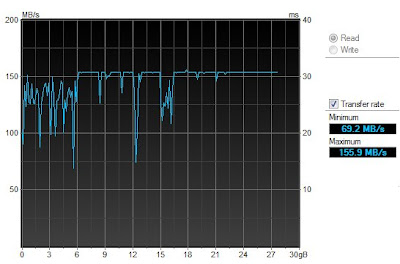 Kingston 30GB SSD - Sequential read rates
Update, Day 3:
Well, it's not quite a deal breaker yet, but as you can tell from the above sequential read speeds of this Kingston SSD, there is a little bit of jitter. Sometimes this little bit of jitter is noticeable when browsing with Google Chrome or when recording high bit-rate video to the drive, as I'm seeing some dropped frames when I do. I guess I can install Google Chrome to a HDD and record to a HDD, but that's kinda lame. I still need to confirm if it is the SSD for sure, or whether there is some other problem. Anyways, you get what you pay for ultimately, but I'm still happy with my purchase. =) Cheers.
Posted by Steve at 1:16 AM

update: i haven't noticed much jitter with the drive lately. the system is still feeling responsive and spiffy -- going back to a regular hard drive now feels sluggish.

overall-- the kingston SSDNOW-V drives are a great value for those budget minded consumer looking for a good windows experience.

no sooner did I speak my last comment than did the Kingston SSD die on me. I wish I could say it had a good run, but it lasted only half a year.

This is my second, or three, solid state drives to die on me this year. The third SSD I just bought last week, so it better not die on me anytime soon.

The OCZ died due to a controller issue, and hopefully this Kingston drive died of the same thing--- at least I can continue to just try different controllers (Intel?) and see what really lasts.

wow, you have very bad luck. I can see in this page that they should not fail that much (specially intel):