In an attempt to give back to the community a bit, I am going to giving a review of my experience with Lenovo Canada and two new products I have recently ordered from it online. The two products are the Lenovo T400 14-inch notebook and a Lenovo Bluetooth Laser Mouse.

I ordered online both the T400 and the mouse late Monday night, from Lenovo.com. The total price, after tax, was about $1,250. Before tax, the T400 cost me $1070, while the mouse cost me $27 (regular $45). Shipping was free. I scored a bit of a deal on the purchase thanks to some e-coupon codes that were mentioned over at Redflagdeals.ca. These e-coupons saved me a lot of money, but it still took about a month of constant checking before Lenovo had what I wanted in stock and at a decently low price.

Shopping at Lenovo.com is a bit like playing the stock market; there are ups and downs. One day the LED back-lighting feature would cost $370, the next day it would be just $30. In the rare case, it would even be a negative value, which leaves me wondering who is in charge of pricing over at that place? When I ordered, I was able to get the dedicated+integrated graphics option at a cheaper price than just the integrated graphics option; woot!

At the regular price of $1,750, I never would of ordered the T400- way to expensive for me. The local retailers, Canada Computers and Newegg.ca, offer better deals then that on other good notebooks, as does even Dell.ca now and then. Looking on Craigslist, I found a few nice Lenovo X61t tablet notebooks selling for just $1100, which I was very tempted to get.

After much consideration and waiting, I decided that the T400 was the best choice considering the price I could get it at. Long battery life, a matted screen and dedicated graphics were some of the key things that won me over with it. I was given an old IBM T23 notebook a year ago and despite it being slow and ugly, it grew on me. I don't know how, but I actually ended up preferring the red nub over a trackpad. When I had a chance to try the Dell D630's blue nub, it was no where near as awesome as IBM's. The IBM nub does get 'stuck' now and then, which causes the cursor to have a mind of its own; which sucks.

Anyways, enough babbling, so I ordered the T400 and mouse Monday night and within a few minutes I had received an email and confirmation of my purchase. No shipping date was listed, which erked me a bit, but earlier in the ordering process a time of 'less than 16 business days' was listed. I have heard some people waiting for months to get their notebooks from Lenovo, while others having it in under a week; I suspect it will take me a month to get mine.

I have to say, the waiting is probably the worst part about ordering online. I really prefer just going to the store, trying it out and taking it home to play without any delay. Ordering online does have the benefit of customization though, so... yeah. After spending a couple hours trying to figure out how to find out online more information about my shipping info, I finally figured it out, kinda. It didn't tell me anything more than your order is being processed. I guess I could call up Lenovo, but talking on the phone is so... old fashioned.

Regardless, the day after I placed my order, I got an email from Lenovo saying 'part or all' of my order has shipped. I got my hopes up, but it turned out that it was just the mouse. The notebook was still in process. In less than two days, the mouse was delivered to my door by a friendly Asian working for a delivery company I have never heard of before. Apparently the notebook will ship via UPS or something more substantial.

So I have a mouse now, but no new notebook. Oh well. I will update this review as things progress, along with a in-depth review of the T400 notebook. So far ordering from Lenovo has gone smoothly, but I still am nervous about something going wrong; I have heard some horror stories.

Considering all that came with the mouse was a pair of Energizer AA batteries, a CD and a couple of mult-languaged documents, it sure came in a big box. A shipping box inside a bigger shipping box, may I add. 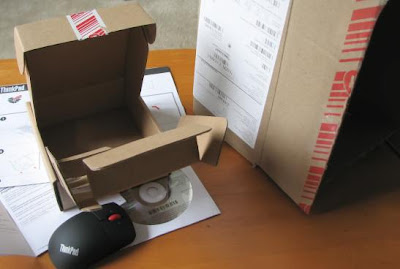 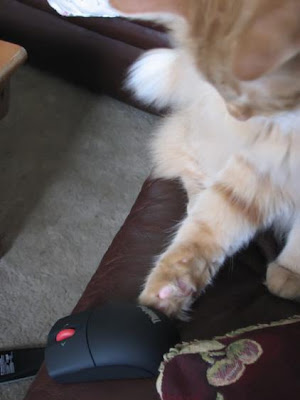 My cat seemed to like the mouse. No surpise there. He was more scared of the unboxing knife than he was of the mouse. 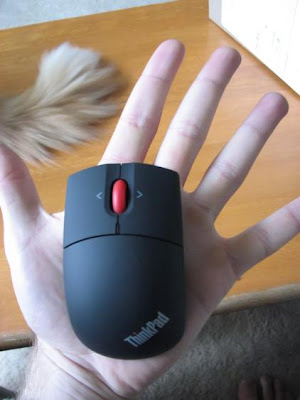 The mouse was smaller than it looked like online, but I should have expected it. It is a travel mouse, designed to be small. It really is not as comfortable as a desktop mouse, especially since it is not ergonomic, but at least lefties can use it too. It feels of good quality and has that Thinkpad rubbery feel to it. Nothing exceptional, just good quality; very Thinkpad-ish.

The red scroll wheel 'clicks' when you turn it, which I like. You can also use it as a button and toggle it side to side for horizontal scrolling.

I can't seem to scratch the mouse with my fingernail at all, despite the surface 'feeling' very soft and smooth. 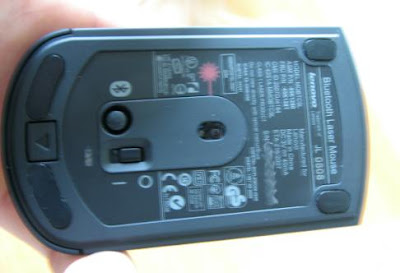 On the underside you can see a power switch, a Bluetooth button, a laser and a battery hatch release. A little green light goes on, on the bottom of the mouse, when you turn it on. The telfon pads seem well made, I guess at least, but the mouse does glides easily on a flat surface. Too easily? 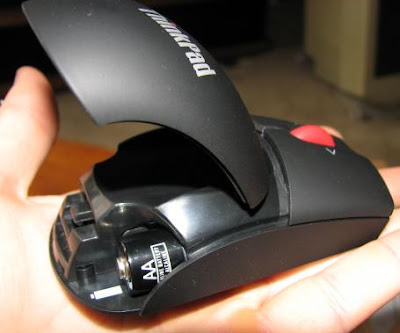 I am told the batteries can last up to 3 months of use, but the mouse goes to sleep after just 10 seconds of inactivity; which I am sure can get annoying, as there is a delay in waking it up again. I will update when I get a chance to use it more.

In case anyone is wondering, there was no Bluetooth dongle or adapter included, so your notebook must already have Bluetooth capabilities for this mouse to work. 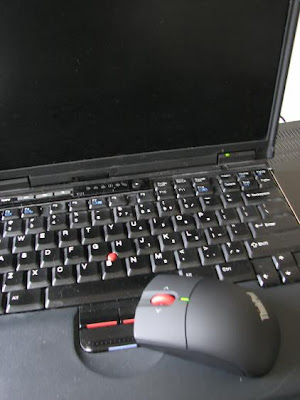 Lastly as you can see, there is a green light on the top of the mouse when it is on as well. I think green is a bit odd fashioned, but it matches a Thinkpad very well- both have little ugly green lights. The red and black also work, with the texture matching very closely. The buttons click well, although along the sides of the buttons it takes a bit more effort to get a click; really though, that isnt a problem and perhaps it will prevent accidental clicks if the mouse bumps into something.

Waiting for the new Notebook to Ship

This is just the first part of a very long review I will be doing, stay tuned. Hopefully sooner than later. It is for Lenovo to decide at this point. :P