Bill Gates and his thoughts on the future. 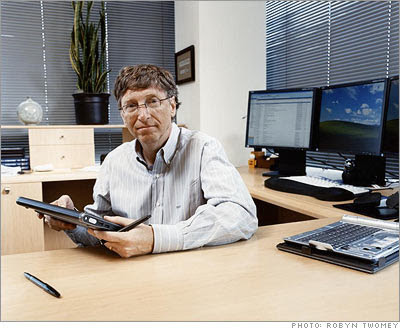 In an interview between the previous PC Magazine editor and Microsoft's Bill Gates, a lot is discussed about Bill's forecasts of the future on such things as speech recognition and tablet PCs. Bill says it may be considered stubbornness, as he has been saying these same things for the last couple decades without some of his predictions coming true, but he still believes these technologies will become mainstream. Eventually when the market is finally ready.

I tend to agree with Bill on a few things. I do think tablet PCs will see more popularity; as they become affordable, students will start bringing them to lectures for note taking. Microsoft's OneNote software is fabulous in this regard and with tablet PCs now in the 1500$ range, it won't be long until it could be common place. They will however NOT replace a keyboard though in your home office. Touchscreens, however, may end up replacing your mouse in many applications -- the iPhone and iPod Touch are great examples of where touchscreens are finding mainstream uses. Gamers and larger screens will probably sway against using touch primarily, due to functionality requirements and fingerprint smudges.

Voice dictation is growing popular in many places -- Google's 1-800-GOOG-411 phone service is an example of how it is being implemented, and it may not be long before you start seeing most kiosks and other self-services using them. Doctors currently are finding voice dictation quite useful and I could see many other applications where note taking or drafting of ideas could use voice dictation. I do not believe it will replace they keyboard when used for document creation any time soon, and there is always something to be said for silence.