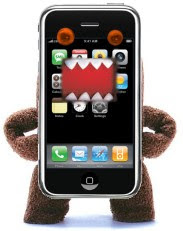 So, the other day Apple announced big news for the iPhone. It was releasing the tools needed for anyone to create applications for the iPhone .. for free. It also is providing free hosting on iTunes for created software, with options of allowing those to make a profit on such distributed software. In essence, the iPhone went from just an iPod+phone to potentially an anything-you-want-it-to-be device.

This is intimidating news for many companies, from RIM to Nintendo to Microsoft, as the iPhone really can be competitive now in many markets. ie: Apple has announced the highly anticipated game, Spore, will make it onto the iPhone by the end of the year.

I still think the iPhone could use a small price drop though...
Posted by Steve at 11:52 PM

I'm not sure if you remember me, I was Dave I's friend. Could you do me a favour please???

I'm trying to delete any online information about myself where I use my full name. I commented on your "The Tomorrow Times: Free Starbucks coffee March 15" blog could you please delete my comments (and this one).