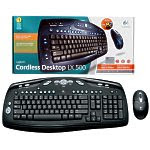 So after a recent incident with my old keyboard involving a kitten and a bottle of diet coke, it was time for a new keyboard. Enter the Logitech LX 500.

I found the keyboard for sale at my local computer shop as a weekend door crasher special for 15$ - strange how they still had plenty in stock despite it being Sunday afternoon. It fit my price range and included a decent mouse, so... :$: Cha Ching :$: 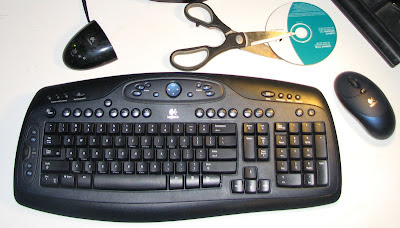 The keyboard and mouse unboxed

The 800 dpi wireless optical mouse is a dark blue and black in colour, with two main buttons, a horizontally and vertically scrolling capable clicking scroll wheel, and a smallish button underneath it for tabbing between windows. The tabbing button does not function without the included software being installed, but the basic mouse functions were working right away. A pair of regular Duracell batteries were included with it. 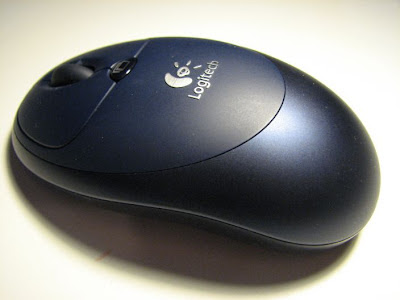 Overall, my impression of the mouse is good for what it is. It feels nice and, even for it not being a very large mouse, it still fits either of my large hands fine. I like the fact the scrolling wheel clicks when scrolling. It's quite simple in function and design; but it works well for what it is.

On a side note, I would of liked to see it however be Bluetooth compatible and include a way to change the DPI of the mouse on the fly, even if it were a switch on the bottom of the mouse, but that is asking way too much for a mouse in this price range. Lastly, the response of the mouse, due to it being wireless I'd imagine, was not quite as swift as my old wired optical mouse, so it ain't really for serious gamers.

Although the mouse worked right out of the box mostly, the keyboard did not. So I had to turn to the driver CD.... ugh.. 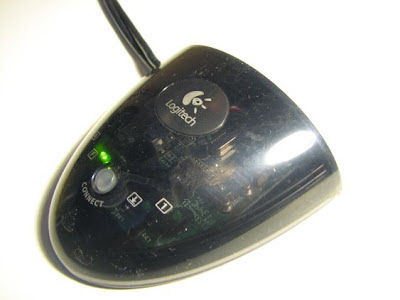 The software included with the keyboard, I wish I could describe, but the driver CD included was defective. Even trying to browse the CD caused Windows Explorer to crash. This left me forced to download the software from the Logitech website, where a newer version of their SetPoint software was waiting anyways.

Their MediaLife media player software also included on the CD I could not install or find, so I am a bit disgruntled about that.

The driver software installed fine once I downloaded them, and it took a bit of time playing around with the software to get the keyboard to still work. Apparently enabling the 'secure' wireless connection in the SetPoint software got my keyboard finally working.. sort of.

Upon testing the keyboard, I started to notice if I typed fast, the keyboard would automatically, and randomly, start inserting the letter 'f' into what I was typing. Quite frustrating.

After checking out the Logitech forums, I found other disgruntled users with the same issue of randomly inserted letters appearing when typing fast on the LX 500 and LX 700 keyboards. There was no support being offered on this issue by Logitech, and despite it seeming as if this was a known problem for quite a while, several versions of their drivers were released with no apparent fix. I had the newest drivers and it seemed there was still an issue. Maybe it was a hardware issue?

Luckily for me, the other forum users found some crude fixes for this problem themselves. One way was to disable the 'Function Lock' key. However, doing so disables all your function keys on the keyboard.... so it isn't a true fix. Another fix, the fix I've decided to use, was disabling the 'secure' wireless connection feature in the Setpoint software. I don't have any random letters being inserted into what I type now at least, but I am noticing my text cursor jumps randomly around in a page now and then when I am typing a document up. I am not sure what the issue is, but this is all very frustrating. I would not want to have someone, less able to cope with computer issues, to have this keyboard. They would surely throw it out a window if these same problems occurred for them.

Anyways, onto the rest of the review...

The keyboard is not quite as responsive as my old wired keyboard. I am a bit disappointed with that fact, as I plan on using this keyboard to play BioShock when it comes out tomorrow. The keys themselves have a nice tactile feel to them though.

Unlike with the included mouse, the keyboard is a bit too small for my large hands to type comfortably on. The keys just feel a tad bit too small and cramped, but would be probably fine for smaller hands.

On the bright side, two regular Duracell batteries were included with the keyboard.

As for looks, my girlfriend says the keyboard looks nice. I think it looks okay, though it looks a bit too curvy and plastic-y for my tastes. However, it doesn't feel cheap or too plastic-y when using it. Besides my fingers feeling a bit too cramped, it's rather comfortable to use. 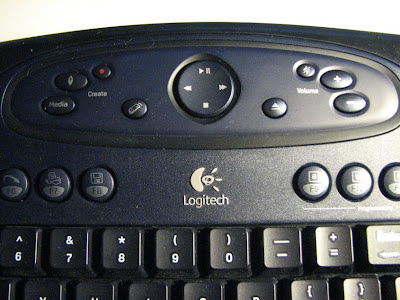 One thing about this keyboard that I must say is that it doesn't lack buttons. It has nearly every feature I can think of, short of a finger print reader and LCD screen. Some of the buttons that I particularly like are the 'My Documents' button, the many media controls, and the side scrolling button to the right-- reprogramming it from a zooming button to a scrolling button now lets me scroll with either my left or right hand. 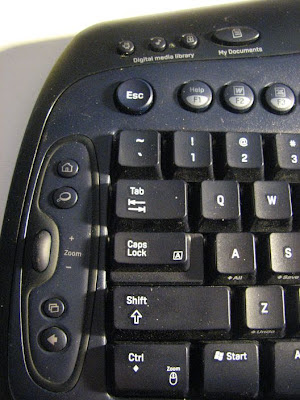 There is an included wrist rest.. and it works I guess fine. It isn't padded though and it does make the keyboard look a lot fatter. 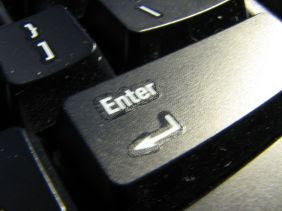 The keys letters are little stickers it looks like. I am not sure of how rub-resistant they will be.

I can't tell for sure, but this keyboard has at least some spill resistance when compared to my older Microsoft keyboard. I do not believe it can withstand much of a spill though still. 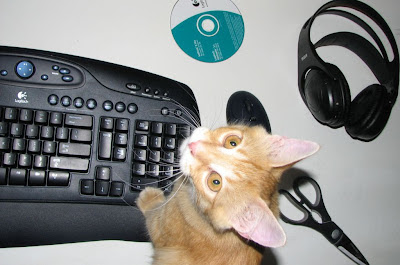 My cat is eager to test out just how spill proof this keyboard really is.
The response rate of the keyboard was noticeably slower than my wired keyboard. So I would not recommend this keyboard for a serious gamer.
( Apparently changing the polling rate of the USB port can speed up the mouse and keyboard by several milliseconds. Some mice drivers do this automatically, such as the G5 or Razor. This mouse does not, nor when attempting to overclock the USB or PS/2 port would the polling rate budge from 125hz, or 8ms of lag. http://forum.overclock3d.net/showthread.php?t=8561 )
Overall, my impressions for the wireless mouse and keyboard combo by Logitech are mixed. The hardware speaks of quality and thoughtfulness, but the software and support were lacking more so than what is acceptable. I would appreciate faster response rates from both the keyboard and the mouse, but there is seriously some focus needed on fixing the odd behaviour the keyboard displays that I noticed.

Slower typists, media-centric users, and non-gamers with capabilities of dealing with the odd behaviour of wireless keyboards would probably find this keyboard fine to use. If you are luckily enough not to have any issues with it, you might even love this keyboard. With what I have been dealing with, I will be looking forward to buying a new keyboard to replace this one sometime soon.
---
~steve

I am having this same exact problem!!!!!!!!! I unsecured my keyboard connection and deep-cleaned every single crevice of the keyboard in hopes that it might repair the problem. Well if I type fast enough;, it puts in random semi-colons! First it was f's, then t's, then a's. Now it's semicolons.

How long did you last before throwing this LX500 against a wall? Because I'm losing my patience quickly...