Some features of digital cameras 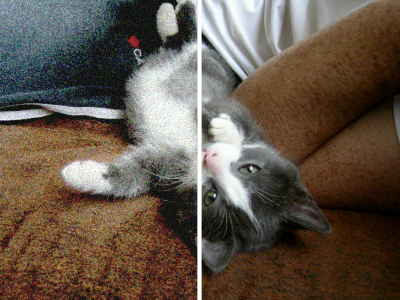 Most of us already have a digital camera that suits our needs. Quite possibly it's a brand of camera you bought at Walmart on sale that no one has ever heard of before, maybe it's the one integrated into your cell phone, or maybe your camera doesn't suck and you are thinking to yourself, what is the point of this article!?

Well, I'm hoping to share a short list of some of the commonly overlooked or new features of digital cameras today that you might be missing out on. You might even find them all just enough of a reason to change what you are hoping for this Christmas.

Have you ever tried to take a photo by hand in a dim room without a flash? The results generally aren't very pleasing. Trying to compensate for the lack of light with high ISO settings or long exposure times could just make the photo noisy or blurry. With image stabilization however, you could get away with that less grainy ISO setting and a longer exposure time without having the image blur nearly as much. Simply, image stabilization is amazing technology that you will never want to be without again. 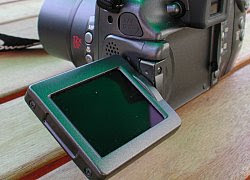 They might be a bit strange, don't seem to be very popular, and they really aren't as big as some other new screens out there, but articulated LCD displays are something you grow to appreciate. I've heard a quote once that there are two types of people, those who love articulated displays, and those who just haven't used one yet.

My appreciation stems from the fact that you can turn the display to face you at any angle, allowing you to get shots that normally would be just too hard. ie: Trying to take a picture of a band while in a large crowd or taking a shot from the ground upwards. Pictures seem to turn out a bit more interesting when you are free to be that extra bit more creative. As well, by folding the display into the camera reversed, you protect the screen from being damaged.

If you have ever had trouble getting your camera to focus on someones face before, this new feature that has recently been added to some of the digital cameras by Canon is worth a look at. When the face detection option is enabled, the camera will be able to detect faces in the field of view and automatically focus in on them. Not the background, foreground, or whatever else may be in the way.

Not so much of a secret, but newer models of imaging sensors tend to produce better image quality than older ones. The same goes for quality brand names versus no name brands. One problem that still plagues digital cameras is image noise, which is more apparent with higher ISO settings. Some digital cameras have advanced noise reduction, which can really help reduce this problem, but the problem with noise is generally not a diminishing one. Higher megapixel cameras tend to be more sensitive to noise than lower megapixel cameras for example, so not always is more better. Some suggest 6 megapixels is a good trade off between detail and noise. A high ISO settings with less noise allows for shorter exposure times and/or less need for a flash in dim lighting. Noise can be filtered out also in post processing with Photoshop, however this can often reduce image detail.

Most people have figured out by now that the digital zoom on their camera is not really any good. Digital zoom does still have its uses, but you simply can't produce a sharp high resolution image with extensive digital zooming. Even with its uses, you're often better off doing any enlarging and cropping of the photo afterwards in Photoshop. What is preferable nearly always is rather a good optical zoom. Almost seeming to be a standard, many digital cameras now include a 3X optical zoom. Even a 3X optical zoom can be limiting at times, however there are some cameras that offer much more; 10X or even higher for example. With image stabilization technology now about on the market, manufactures are daring to release more of these high optical zooming cameras.

Not a critical addition for most photographers, but having the capability to take a wide angle shot with a compact camera does come in handy now and then. There are some brands offering such wide angle capabilities in their compact camera models and it's worth it to keep an eye out for them.

That's it for list. Thanks for reading. If you are looking for more on camera reviews or suggestions, I highly suggest the following website: http://www.imaging-resource.com/ I am not a camera expert, but these are my honest suggestions of features that you might find beneficial in your next camera purchase.

My own suggestion for buying a camera is to stick with Canon brand cameras if you are not sure what you are doing. Other brands, such as Nikon and Olympus, do offer quality cameras, but you simply can't go wrong with a Canon camera.

If you would like to experiment with some real photography, yet are not able to afford a digital SLR camera, may i recommend to you the Canon PowerShot S3 IS. It is not a compact camera, but it does have many of the features I have mentioned in this article.

With compact camera needs in mind, the Canon PowerShot SD800 IS is really quite a stunning camera that is simply loaded with features. It is geared towards being more a mindless point and shoot camera, which it does an excellent job at, but it has enough manual control to also please most enthusiasts.

For those on a tighter budget, the Canon PowerShot A540 is a very impressive bundle for the price.

Lastly, for those looking for an inexpensive digital SLR, the Canon EOS 400D Rebel XTi is currently a very popular model.

Wow talk about a noone talking about stuff that they dont understand...

anon: Instead of just being insulting, could you at least suggest ways i could improve on the article.

I got a canon A540 for xmas and have been trying to learn a little more about it and fn your blog interesting and helpful to someone starting out knowing absolutely nothing. so just ignore mr.hateful up there. thanks for the info and the link.

Hello fellow bloggers, here is an excerpt from an article I found to be quite interesting:

In January 2007 Olympus released a new model, the SP-55OUZ, which seems to be the prodigy of this line, being a lot more performing than the previous model, the SP-51OUZ. The main characteristics of this camera are the image stabilization, 7MP resolution, and the 18x optical zoom range. The Zoom market became quite competitive and the model in discussion competes with other high quality models, such as Sony H5 or Panasonic FZ8.

This new Olympus camera is supported with Olympus Master software and AA batteries, has internal memory and xD picture card slot, over 20 scene modes, 25 language options, RAW and exposure modes, super macro mode, and 7.1 Megapixels. The SP-55OUZ model is not a small camera so some may not prefer it because of this, but taking into consideration its qualities, the size is not at all an inconvenient. It is similar in many ways to the Canon EOS 1Ds digital camera

Another great digital camera is the new FinePix S4700 from Fujifilm. This model is the optimized version of the FinePix S4600 model, which was voted last year as the European Zoom camera of 2006 by the most important European association of electronics consumers. The new model is compact and lightweight, has 10x optical zoom lens, Fujifilm Intelligent Flash system, having several scene selections. Its menu system is highly improved and it is ideal to carry with you anywhere, since it can be easily operated with one hand.

The most significant changes FinePix S4700 has over its predecessor are the ergonomic design, reduced proportions, improved ISO sensitivity up to 1600, new flash modes and a 7.1 Megapixel CCD sensor.

Sony Cyber-shot DSC-g1 is another great digital camera recently released on the electronics market. The G1 model, in particular, is Sony's first wireless digital camera, which has 2.0GB of internal memory, 6 megapixel and a 3.5 inch LCD with a 921,000 pixels resolution screen – similar stats to the Canon PowerShot S50. This model has the ability of sending photos wireless to other digital enabled devices such as laptops, palms, PCs or cameras. Reviewers say that Sony G1 model is the perfect take away digital camera, since its internal memory is pretty generous.

Hope you found this to be a good read,